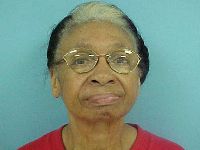 An elderly Enfield woman is in jail today after allegedly beating her husband with a frying pan following an argument over breakfast.

As Rosie Lewis worked to prepare a second breakfast, authorities said, the couple continued to bicker. The fight escalated when James Lewis allegedly drew back his cane to hit his wife

“Mrs. Lewis, at this point, picked up an iron frying pan and hit Mr. Lewis on the head several times, knocking him to the floor and causing a head injury,” said Lt. Stevie Salmon.

James Lewis was taken to Halifax Regional Medical Center, where he received 50 stitches. He was in good condition earlier this week, officials said.

Rosie Lewis was charged with assault with a deadly weapon inflicting serious injury and taken to the Halifax County jail, where she remained Tuesday. The suspect will not be allowed to post bond prior to her first court appearance Aug. 26, due to a state law intended to protect victims of domestic abuse from further violence.

Authorities would not say what breakfast dish sparked the dispute.