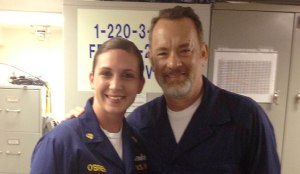 Danielle Albert had planned to be at home the day a Hollywood film crew climbed aboard the guided missile destroyer Truxtun to begin shooting “Captain Phillips.”

But when the ship’s executive officer learned that actors would be practicing dangerous stunts on the flight deck, he ordered Petty Officer 2nd Class Albert and the rest of the medical staff to come in on their days off – just in case.

The 24-year-old sailor and single mom didn’t know that she would spend that afternoon acting alongside Tom Hanks in what would become the emotional climax of one of the year’s biggest films.

Albert’s only previous stage experience came in fifth grade, when she played the caterpillar in Easton Elementary School’s rendition of “Alice in Wonderland” back home in Washington state. Her main job, she recalled, was to blow bubbles.

So when director Paul Greengrass walked into the ship’s sick bay and asked her to ad-lib a scene with a two-time Academy Award-winning actor, Albert grew light-headed.

“What do you mean?” she said, wishing she had bothered to do some reading on the film before reporting to work that day. She was totally unaware of the dramatic 2009 rescue of cargo ship captain Richard Phillips from Somali pirates that became the basis for the film.