By the time the Norfolk-based Navy helicopter began falling, it was too late. 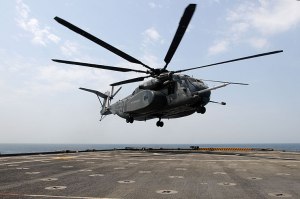 The MH-53E Sea Dragon was spinning counterclockwise, drifting out of control as its engines strained against the weight of a downed aircraft it had lifted moments earlier out of a canyon in the mountains of Oman.

Panicked crew members shouted orders to drop the oversized load and abandon the heavy-lift mission. Before they could, the chopper’s tail smashed into a ridge, and the helicopter careened into a canyon, landing upside down and bursting into flames.

Their deaths, and the loss of a $50 million helicopter, could have been avoided if the crew had followed standard Navy flight guidelines before and during the botched salvage operation, according to a command investigation.

The extensive investigative report, obtained this week by The Virginian-Pilot through the Freedom of Information Act, blames the entire crew for skipping preflight safety checks and for failing to develop a concrete plan for how and when to abort the mission.

“There were several opportunities to break the chain of events that led to this tragedy,” the report stated. “This mishap was completely preventable.”

Moreover, the report said, the crash revealed a series of systemic and cultural problems in Helicopter Mine Countermeasures Squadron 15 and within the broader Navy Sea Dragon program, which is headquartered at Norfolk Naval Station.

“The tragic events of that day shed light on a lot of things that a lot of people, myself included, should have seen a long time ago,” Capt. Todd Flannery, the commander of Helicopter Sea Combat Wing Atlantic, said in an interview Friday. “This event, unfortunately, was years in the making.”

Days before the crash, the Royal Air Force of Oman requested the Navy’s help moving a twin-engine helicopter that had crashed a week earlier in a rocky ravine about 58 miles southwest of Muscat, the capital.

Cmdr. Sara Santoski, then the skipper of HM-15, hand-selected a crew of her most experienced aviators to airlift the downed helicopter to a nearby airfield. Santoski, who was later relieved of command, directed the crew to “take no unnecessary risk,” according to the investigation.

The names of the surviving crew members were redacted from the report, but it did identify the co-pilot as the squadron’s executive officer.

The seasoned helicopter crew arrived at Al-Mussanah Air Base in Oman a day before the flight operation to view the wreckage, record environmental conditions and plan the mission.

Based on the weight of the downed helicopter – estimated at 13,200 pounds – and the strength of the Sea Dragon’s engines, the lead pilot noted there would be only a small margin between “power available” and “power required” to perform the lift.

The pilot later told an investigator that he did not know Santoski had issued guidance requiring a 5 percent power margin to proceed with the lift.

During the planning, the air crew briefly discussed dropping two crew members from the mission to lighten the Sea Dragon’s weight by a few hundred pounds. The unconventional suggestion made one crew member wonder whether the lift was too dangerous, but he didn’t reveal his misgivings until weeks later.

On the day of the mission, the pilot and co-pilot opted against performing an operational power check of the helicopter, instead relying on the calculations they gathered a day earlier. They also decided against setting specific power numbers to determine whether the load was excessive. The pilot later said he believed he “would just know what excessive was” when he felt it.

The planning decisions were among several violations of Navy air training and operating regulations, according to the investigation. The missteps continued after the helicopter lifted off the ground.

A video of the operation posted to YouTube shows the massive Navy chopper hovering a few dozen feet above the canyon floor as a ground crew attaches a hook to the downed Omani aircraft. Moments later, the Sea Dragon rose above the canyon, the smaller helicopter dangling below.

Based on the torque and power readings following the initial lift, the co-pilot later told an investigator that it was obvious the Omani helicopter was heavier than they thought. The power margin hovered between 0.6 percent and 2 percent as the pilot steered the helicopter away from the site.

Observers said it traveled about 50 yards before the tail of the Sea Dragon began to drift, a clear sign of a power deficit. The crew member responsible for watching through the left window told the pilots to “pull power,” fearing they were hovering too close to a cliff. They narrowly cleared it, but seconds later, the chopper began to spin counterclockwise as the tail rotor lost power.

“Lost tail!” one of the crew members shouted.

The co-pilot shouted “pickle!” – the signal to dump the load. A second later, two other crew members repeated the signal. But the crew hadn’t discussed the plan for an emergency jettison, and before anyone could act, the tail rotor hit the ridge, and the helicopter rolled into the canyon.

Sullivan, who was standing below the main rotor, was crushed by the gear box, according to the report, and likely killed on impact when the helicopter landed upside down.

Another crew member blacked out momentarily after impact, he told an investigator. He found himself resting on top of Fitzmorris, who was unconscious. The crew member scrambled out, he said later, fearing they both would die in the fire if he tried to pull him out.

Both pilots escaped through a cockpit window. The three survivors ran from the scene as the fuselage erupted in flames, followed by a series of explosions.

A day passed before the wreckage cooled enough to perform a proper search and confirm the two fatalities.

The investigating officer recommended that neither pilot be allowed to fly again. That’s a decision left to a field naval aviator evaluation board, whose decisions are not made public.

Flannery, then the deputy commander of Helicopter Sea Combat Wing Atlantic, was tapped to temporarily lead the squadron after the crash. It was soon apparent, he said, that the deadly accident was a symptom of larger problems in the Navy’s Sea Dragon community.

Sea Dragons, assigned only to two Norfolk-based squadrons, are primarily used to clear mines from shipping lanes, but they are also the Navy’s preferred option for heavy-lift operations.

The service had planned to begin phasing them out in the mid-2000s, but without a viable replacement, it kept the Sea Dragons flying.

The mixed signals on the future of the program, combined with a lack of financial investment from the Navy, allowed the Sea Dragon community to “fly under the radar” and develop some bad habits, Flannery said. Many of the sloppy missteps revealed in the crash investigation had become commonplace, he said.

“This didn’t happen overnight,” Flannery said. “This was an atrophy over a long period of time.”

Since the crash, Flannery said, the Navy has invested millions of dollars to upgrade and better maintain its remaining 29 Sea Dragon airframes, including adding more than 100 maintenance personnel to the two Norfolk-based squadrons. The Navy also enhanced Sea Dragon pilot training to include mountain flying exercises and installed new leadership at both squadrons.

“It was absolutely tragic that it came to a head the way it did, that we had a mishap and two people lost their lives,” Flannery said. “I can’t say anything good came out of that. But the changes that came out of this mishap were profound and have put the community back on the right path.”